In 1985, a group of about 50 Christians—seeking a new way to honor the Father in worship and hungering for a better understanding of the Word of God—gathered in the pioneer church at Living History Farms in Urbandale, Iowa. They came together to talk about the feasibility of organizing a new congregation to meet these needs. As these 50 Christians shared their ideas and dreams, an infant church was born! Leadership was put into the hands of 12 individuals who were constituted as the Steering Committee.

As with the early Christian churches of New Testament times, the group initially met in the home of a member. By 1986, Indian Hills Junior High School in Clive was home to the group, and later they moved to Clive Elementary School in Windsor Heights.

Also in 1986, the group called Wayne Hoffman, an ordained Presbyterian minister, to serve as their pastor, to shepherd them through the throes of birthing a new church, and to guide them in establishing a permanent place of worship. On Christmas Eve of that year, the State of Iowa issued a Certificate of Incorporation for a not-for-profit group called the Westkirk Fellowship. Westkirk became a member of the international Evangelical Presbyterian Church in 1987. The congregation continued to grow and moved services to McLarens Funeral Chapel in West Des Moines while they planned for a permanent facility.

In 1990, Westkirk Evangelical Presbyterian Church formed a building committee and named it the Nehemiah Committee, after the Old Testament prophet who rebuilt Jerusalem. During a site-scouting trip, Pastor Hoffman spotted a sloping patch of land for sale just off of Colby Woods Drive in Urbandale. Owned by the West Des Moines School District, the land was purchased—and to help finance the construction of the church building, a portion of the land was parceled into 16 residential lots.

The architectural firm of Savage Ver Ploeg was selected in 1990 to design Westkirk. The design chosen provided for a building almost as it appears at the present time, with the exception of a desired basement. The setting was readied for church construction and, at last, a memorable groundbreaking ceremony was planned. The tall grass was mowed to allow members to encircle the future sanctuary site. A bagpiper led the Session and the Nehemiah Committee to the site to the tune of “Amazing Grace,” and the congregation then sang “On Holy Ground.” Construction began that same week. Very few delays were encountered during construction, which ended with the raising of the steeple to its final resting place.

The keys to Westkirk were officially presented to the members at a dedication ceremony held October 28, 1992. The towering steeple pointing to God on High introduces one to the symbolism throughout the building that surrounds the Westkirk congregational family. Few churches include as many reminders of their roots as have been thoughtfully provided at Westkirk. (See Symbolism at Westkirk for further insight.) 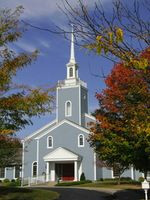 New members were added steadily until it was apparent that additional space was required—especially to accommodate Sunday School and social activities. The decision was made in 1996 to add a west wing to the building, but only on a pay-as-you-go basis. So in 1997, when funds were available, a groundbreaking ceremony was held and the shell was erected. Many hours of volunteer labor, several fundraisers, and generous contributions later, the debt-free wing was dedicated on May 23, 1999.

A Season of Change

Two significant events in early 2002 marked the beginning of a season of change in the life of Westkirk. First, in early January, Pastor Hoffman announced his plans to retire. Guest preachers would fill the pulpit beginning in March—until a new pastor could be selected. Second, February saw the initial steps taken to sever the relationship with the Evangelical Presbyterian Church, Mid-America Presbytery. In July, a Pastor Nominating Committee (PNC) was elected. During this interim period, the Acting Moderator and the Clerk of the Session led the church.

On August 5, 2002, the congregation voted to disconnect from the denomination and return to an independent Presbyterian status. Throughout this transition (and to present day), Westkirk has continued its founding principles of Reformed theology and Presbyterian government, and has added members who are dedicated to deepening and demonstrating their faith in concrete ways to the world. In November of that year, Wayne Hoffman was named Pastor Emeritus and called to serve as Interim Pastor until a new senior pastor could be selected. The search for a pastor continued through 2003, with the PNC (led by David O. Durlam) patiently searching for the person who would be just the right fit for Westkirk. Michael L. Mudlaff was selected on February 8, 2004, and began serving Westkirk on March 1.

On March 21, 2004, a beautiful ordination/installation service was held to officially call and recognize Michael Mudlaff as Pastor and Head of Staff at Westkirk Presbyterian Church. With the following words spoken by Chuck Heitbrink, Acting Moderator of the Session, and with assistance from Elder Jason Hoffman, son of the founding pastor, Westkirk received Pastor Mudlaff: “By the authority of the Session, I declare that Michael Mudlaff has been ordained to the Gospel Ministry of Westkirk Presbyterian Church, and that he has been duly and properly installed as Pastor of this congregation, agreeable to the Word of God and the laws of this Church. As such, he is entitled to be given support, encouragement, honor, and obedience in the Lord. In the name of the Father, and of the Son, and of the Holy Spirit. Amen.”

In 2007, plans were finalized to complete the original dream of Westkirk’s beautiful building and campus. The 3-year FINISH! Campaign culminated with over $425,000 in pledges. The parking lot was expanded, sanctuary seating was added in the mezzanine, and office and education space was created as we expanded our facility toward the east. Member and architect Alvin Stecker, as well as Ken Bratney, chair of the building committee, led the charge. The committee selected the Pinnacle Construction Group of West Des Moines as general contractor. As Westkirk continued to grow in space and number, a groundbreaking to celebrate the new campus expansion was held on a warm Wednesday evening in September. The covenant family of faith then invited friends and special guests to join them for a service and celebration on Reformation Sunday, October 28, 2007. At this very special service, we celebrated God’s blessings upon Westkirk’s ministry and we looked back at the church’s 20-plus years—and forward to its future. Attendance by Pastor Emeritus Wayne Hoffman and his wife, Helga, made the event complete. Construction was finished in August of 2008.

God established His Church to be a living and growing organism! In 2011-12, Westkirk celebrated its 25th year of ministry, and as part of our celebration and under the leadership of Pastor Mudlaff and the Session, we renewed our commitment to our long-standing mission: TO KNOW CHRIST AND MAKE HIM KNOWN—with these four goals in mind:

• Simplifying our process of discipleship;

• Raising our expectations for membership;

• Developing a more outward focus of service and ministry

Today, Westkirk Presbyterian Church is celebrating a renewed spirit of growth—both spiritually and numerically! New families of all ages are making Westkirk their church family. We offer a revitalized Children’s Ministry; a new emphasis on preparing our youth for life in the faith community; two Sunday morning adult fellowships; the fruit of small gatherings of believers in homes, called Housekirks; and a commitment to local and global evangelism through a growing missions program. Through it all, we have maintained a desire to reach beyond ourselves to make an impact in our community and around the world—through the preaching of the Word, through service to others, and through the sharing of our resources. Our commitment to the beauty and reverence of a Sunday morning—traditional, yet relevant, corporate worship—remains.